Wales is so European

It is fairly well known that the word “Welsh” means “foreigners” (“Wales” being country of the foreigners). But many people probably assume as I did that this was a name given to us by the English. But the name goes back much further.

In fact the name Walhaz was given to the federation of Celtic tribes (Volcae) in the Hallstatt region of Austria and Bavaria. In modern Welsh “halen” means salt which gives the name Hallstatt and Hallein a large salt mine in the area. Notable also is the development of swords and iron in the area. Yes, we were miners and steelworkers even then.

This name was borrowed by Old Norsk, Slavs and others and you can still find many examples of the use of this name. In Bavaria you can find a lake called Walchensee. Trentino is historically called Welschtirol, and the historical German name for Verona is Welschbern. The term Vlach is also a derivation as is Wallacia in Romania. And in Polish the term Wlosch is used for Italians as the north of Italy was Celtic. In Switzerland the German speakers use the term “Welsch” for the French and Italian speaking Swiss who were Celts originally. There is also Wallonia in Belgium. Closer to home the “wall” in Cornwall and towns in England such as Walsden and Wallasay.

But it doesn’t end there. Wales is Pays de Galles and Pais de Gales in French and Spanish, respectively. This is also thought to be a derivation from Walhaz as w becomes g in some languages. That gives us a number of other examples. Everyone knows Asterix the Gaul and the Galatians in Turkey that St Paul wrote a letter to. Yes we were in all these places. Then there is Galicia in northern Spain, Galati in Romania and not forgetting the gal in Portugal.  There were even people in Ukraine in the area near Chernobyl who spoke a language like Welsh and were called Welsh as the names Gallitsyja and Galich attest.

It is quite funny that an old English word for the people of France was Galwalas which means foreign-foreigners. Our own name for ourselves is proto-celtic Kombrogis (Cymro) means simply compatriot or fellow countryman. There are also a few other examples of this name such as Cumbria, Cumberland and the Isle of Cumbrae near Glasgow.

We can rightly count ourselves as one of the great European civilizations on a par with the Greeks and Romans but unlike them we weren’t an empire but instead various decentralized federations of clans and tribes. Culturally – maybe a bit undisciplined. Yes, we were a bit warlike, we drank a lot, especially before battle and tended to fight among ourselves quite a lot. A lot were happy to be mercenaries.

But we were far more sophisticated than we are given credit for. We had conferences with thousands of people in attendance. Sometime the debates would get very boisterous so there were officers whose task was to calm people down. They also sometimes played soothing music for the same reason. Though the Romans and Greeks tended to be condescending one thing they are all in agreement with is that we were excellent at debating and persuading. There is also evidence that in some places officials were elected. We created the first Erasmus system as druids from across Europe travelled to Celtic Britain to study. (at Oxford apparently!)

We set up many European cities like Lyon, Milan, Sens, Geneva, London – the Venetii created Venice, the Boyii – Bologne and Bohemia and the Parisii created Paris. Funnily enough the Parisii emigrated to Humberside in England and swapped their high culture and culinary skills for mushy peas and chips. A number of tribes gave their name to countries – the Belgae to Belgium and the Helvetii to Switzerland.

The Romans had the Colosseum and the Greeks their acropolis. Well, we built Tre’r Ceiri. OK, maybe not quite as impressive. Our architectural skills may not have been that good.

The Romans and Greeks had their squiggly script that no one else understands – well we had one also in later years – Ogham. And this is part of the ISO 9000 standard so is available on your devices and laptops. ᚇᚔᚓᚋ which is DiEM in Ogham.

OK, maybe this script didn’t quite catch on but that doesn’t mean we didn’t have writing. Julius Caesar noted that after conquering the Helvetii he found a written census containing 340,000 names of tribe members along with their skills and wealth. We also had coins and a lot of trade. Apparently we imported copious amounts of wine from the Mediterranean.

You’ve heard of the Julian calendar. Well we had our own which was based on five year cycles both solar and lunar and was pretty much accurate. We started our day at dusk so there were twelve hours of darkness followed by twelve hours of light. The same with years – we started our year at Calan Gaeaf (Halloween) so there were first six dark months followed by six light months which started at Calan Mai (May day). The lunar cycle also started with a dark phase followed by a light phase. So always looking forward to the light and positive.

But more significant we were fashion gurus. It is noted that male and females plucked their body hair and, despite the feasting and drinking, potbellies were anathema. But more than that – if it wasn’t for the Welsh, Europeans would be wearing tunics and togas today. We wore trousers. It is also noted by Roman writer Diodorus Siculus that we dyed our hair and strengthened it with artificial substance i.e. we used gel to spike it and also some had mohicans. We created the George Harrison look of long hair and moustache. And a lot of modern jewellery is based on our designs. 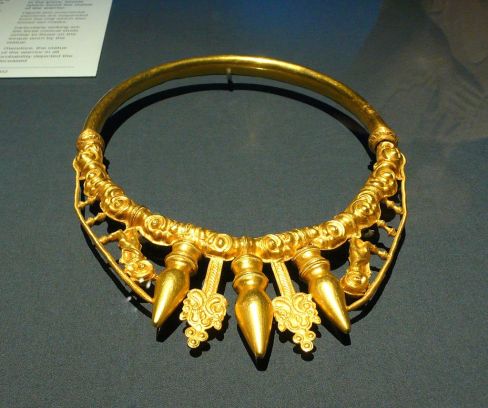 Though a male-dominated society women did have a higher status for the period. There is some evidence that women could file for divorce and there were female leaders like Buddug (Boudica) and there were female warriors. Women played a big part in the Druidic religion, taking on the roles of priests, scholars and judges. Women of other cultures were jealous of the freedoms that they had.  A comment made to Julia Augusta the wife of Augustus by a Celtic woman,  “We fulfil the demands of nature in a much better way than do you Roman women; for we consort openly with the best men, whereas you let yourselves be debauched in secret by the vilest.”

We were conquered by the Romans, but it is wrong to assume that this was the end. It took 400 years for them to pacify their empire. We weren’t all killed and the continent filled with Romans. Instead the governmental machinery was taken over and the aristocracy assimilated but everyday life went on as before. They worshipped the same gods spoke the same language for a long time. Gradually the Celts across most of the continent took on Latin-based languages. In some cases this seems odd – Galicia and Asturias for example are very remote, mountainous regions. Their art, music and mythology is very Celtic and yet their languages belong to the Romance branch. Contrast this with the Basques whose language is completely different, but also live in a mountainous region nearby. This could be because there were greater similarities between Latin and Celtic, so it easier for them to assimilate. If you look at the Indo-European linguistic family tree you see that the Celtic and Italic languages derive from the same Celto-Italic-Tocharian branch.

Today the Portuguese, Galician and Asturian languages have 800 words that can be definitely identified as of Celtic/Welsh origin; with French there are a 100. But there might well be more as you can’t always tell given that the languages are related anyway. In my view it was more of a linguistic amalgamation than is generally thought.

The Welsh were all over Europe – we have our very name written in historical graffiti across the continent. Our European heritage runs deep and we are more European than anyone else. We should build and foster our European identity. It will be a shame if we cowardly slink off on Boris Johnson’s Brexit ship only to see it gradually sink as it leaves the harbour.  There are great battles for democracy and equality and against climate change to be fought in Europe. And we should be there, taking part, and doing it in a boisterous, decentralized, Celticii way.

Based on a talk given in the DiEM25 international event From Dusk ’til Dawn 19th May, 2019